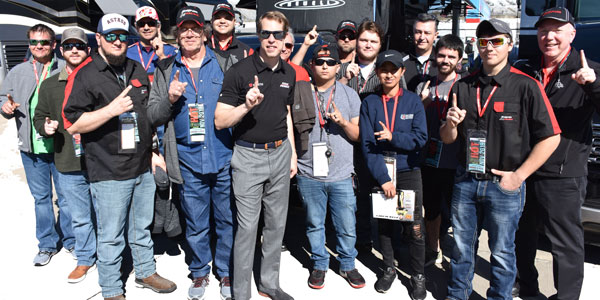 Enrolled SEP students who previously opted-in to receive program email alerts, or who signed up to receive emails during the period from August 1 through September 30, 2018, were entered into the promotion. The four winning SEP students were Colt Ott, Stephanie Ramirez, Christopher Jackson and Dalton Sandifer.

The students’ day at the track included meeting Team Penske driver Brad Keselowski, exclusive tours of the garage areas and pit row, and seats in the luxurious Victory Lane Club suites. The four winners and their guests had special access to the start of the race, watching the green flag drop from behind Keselowski’s pit box. Their VIP experience also included lunch and refreshments in the Victory Lane Club.

“I opted in to get email updates when I originally signed up for the Student Excellence Program, and a few months later I received a note saying I won a trip to Texas!” said Colt Ott, of Eldorado, Wisconsin, who attended the race with his father. “I said, ‘no way, you have the wrong person.’ But sure enough, here we are!”

This was the second Snap-on Student Excellence Program Team Penske VIP racing promotion of 2018. Earlier this year, four SEP members who purchased a qualifying tool box were randomly selected as winners of a trip to an August race in Michigan.

“We’re thrilled to have offered students enrolled in Snap-on’s Student Excellence Program opportunities to win a custom Team Penske VIP racing experience,” said Tom Murray, director of marketing and business development, Snap-on Industrial. “Everyone at Team Penske was very accommodating to our winners in Michigan and Texas. We couldn’t ask for better partners than Team Penske to create a one-of-a-kind racing experience for our students.”

In addition to the four Team Penske VIP racing winners, Snap-on awarded prizes to other participating students, including Snap-on starter tool sets, which feature a variety of hand tools, as well as Snap-on hats.