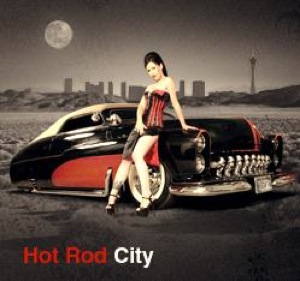 A classic car and scooter collector since the 1970s, the renowned New York and Miami real estate developer has accumulated hundreds of vehicles and thousands of pieces of memorabilia.

Many of these are on permanent display at The Dezer Collection (www.dezercollection.com), a South Florida based car museum and pavilion featuring over 600 of his vehicles.

The museum and showroom portion of Hot Rod City, located in an industrial area near the Vegas Strip off Tropicana Avenue and 5115 Dean Martin Dr., features some of the most popular vehicles in Dezer’s extensive collection.

Many of these are film and TV icons, including the "Beverly Hillbillies" jalopy, the Mercedes from box office hit "The Hangover," the Harley that Arnold Schwarzenegger rode in "The Terminator" films, the Dragula (Grandpa Munster’s hot rod coffin on wheels), the "General Lee" Dodge Charger from "Dukes of Hazard," the "Robocop" police car and other famous TV and film cars customized by favorite celebrity car owner George Barris, known as the "King of Kustom."

The honorary "Mayor of Hot Rod City" is veteran entertainment publicist and marketing expert Steve Levesque, a resident of Las Vegas who is an avid car and motorcycle aficionado and collector. His Las Vegas and Los Angeles-based firm LUCK Media & Marketing, Inc. (www.luckmedia.com) recently announced the launch of LUCK Media & Motors offering PR/marketing for the automotive and motorcycle industry.

In 2010, he teamed with Collection Director Brian Grams to open the now public museum, which was deemed the largest vehicular attraction in the U.S. The Dezer Collection, along with nostalgic memorabilia, food court and shopping are housed in the 250,000 square-foot air conditioned facility.