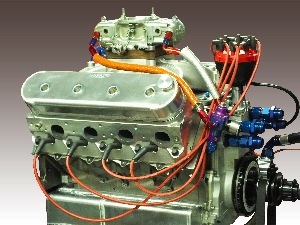 The SEMA Scholarship Committee has announced that its 2013/2014 SEMA Engine project will feature a 700+ horsepower package based on a Dart LS Next cast iron block.

The engine will be offered on eBay beginning December 12, 2013 and the proceeds will benefit the SEMA Memorial Scholarship Fund, which aids young men and women seeking careers in the automotive industry.

Heading the SEMA build team is Dart’s Richard Maskin, who has been the engine builder/crew chief for several NHRA National Points Championship-winning efforts in Pro Stock.

Maskin has developed a 434 c.i.d. engine combination that is dyno-proven to generate in excess of 700 horsepower utilizing a single 4-barrel carburetor on pump gasoline.

This aftermarket iteration incorporates a number of unique features, the most noticeable being a redesigned bottom end with improved oil control and a reduction in windage. It also utilizes a standard distributor instead of a factory coil pack setup.

A pair of CNC-ported Dart Pro1 aluminum cylinder heads will be employed in the SEMA Scholarship engine.

Components from a number of highly respected aftermarket firms are being used in the build.

The engine will be finished to the requirements of the buyer, whether it’s to be used for racing or the street.

SEMA’s scholarships are awarded to university, 2-year college and trade school students pursuing a career in the automotive industry.

There is also a Loan Forgiveness Program to help retire student debt that’s available to employees of SEMA member companies.

For information on applications go to www.SEMA.org/scholarships.

The SEMA Memorial Scholarship Fund is a recognized 501(c)(3) charity and the purchase price of the engine may be tax deductible (verify with your CPA or tax preparer).

For additional information on the engine, or to get involved in the eBay sale, go to www.SEMAengine.com.