FEBRUARY
Starting in February with the Tennessee Speed & Sport Division 2 event in Nashville, TN. Team ARP – East Ridge High School from Chattanooga, TN, became the first National Championship challenger as they won against eight other teams with the best time of 43 minutes and 23 seconds.

MARCH
In March, Team PRW – Fremd High School from Palatine, IL. was the Division 3 winner at the Race & Performance Expo in St. Charles, IL. Competing against 16 schools, they won with the best time of 44 minutes and 15 seconds. APRIL
April brought the Edelbrock Rev’ved up 4 Kidz Division 7 event with Team Edelbrock – North Orange County ROP, Anaheim, CA. winning against 9 schools with the time of 36 minutes and 18 seconds. The Wildcard team Team Auto Meter – Loara High School from Anaheim CA. came in second place with a time of 38 minutes and 24 seconds at this same event.

MAY
In May,  Painless Products held their first Division 4 event at the Tarrant County College in Fort Worth, TX. Winning over 7 other schools with a time of 60 minutes and 15 seconds was Team MSD – Eastern Oklahoma County Tech Ctr., Choctaw, OK. The end of May brought the fifth and final regular season engine challenge.

SCHOLARSHIPS
In 2010, The Hot Rodders of Tomorrow Engine Challenge had 51 schools participate, reaching 255 students.
To date, over $450,000.00 in total Scholarship monies have been presented to our participants from Ohio Technical College (OTC), The University of Northwestern Ohio (UNOH) and the School of Automotive Machinists (SAM). 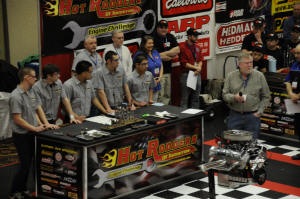 THE EVENT
The event itself resembles the tear down between rounds at a drag race. The engines are identically prepared small block Chevys complete with all the goodies. Students must properly disassemble the engine using only hand tools, utilizing proper detorque and disassembly procedure.

The air cleaner, carb, distributor, plug wires, spark plugs, manifold, headers, heads, lifters, rocker arms, push rods, timing chain and cover. Then the oil filter, oil pan, oil pump, plus all eight pistons are then removed. The cam and crank remain in the block. The team then returns behind their bench and wait for the judges to call them back. Teams then begin working to reassemble once again with correct assembly procedure and torque specs, all while being viewed by judges and spectators.

Time added penalties for dropped components, improper disassembly, assembly, sportsmanship, etc. will be added to ensure correct assembly. All procedure penalties are in the rule book provided to the schools at the start of the school year. The engines when reassembled would fire up and run if gas, water, and oil were added. The team with the fastest time including penalty minutes wins.

The staff of The Hot Rodders of Tomorrow is 100% volunteer and cannot be thanked enough for the thousands of hours they donate to this great event every year.

Started at the inaugural Race & Performance Expo in 2008, The Hot Rodders of Tomorrow Engine Challenge has quickly grown into a nationwide engine challenge with more Schools and Sponsors supporting this exciting event. For further information visit: http://www.hotroddersoftomorrow.com .