Hershey, PA –  Fifty years ago, before the internet, television and modern mass marketing transformed how we shop for our cars, America’s automakers went to great lengths to dazzle the public with their annual offerings.

Each year, the new designs would make their debut to much fanfare and public excitement.  Dealer’s often papered their windows in anticipation of the crowds that would lineup outside for a first look at a much anticipated new model or the redesign of a best-selling favorite.

In many cases, people really did not know what to expect.  Now days, thanks to TV commercials and an abundance of automotive publications and websites, we all know almost exactly what every new car will look like long before it reaches a dealer’s showroom.

Beginning in the late 1930s Detroit’s automakers began to introduce their new ideas through what came to be known as concept or Dream Cars. These machines were straight out of the design studio and they were intended to capture the imagination of the car-buying public.

Beautiful, striking and outrageous they sometimes gave hints of the new technology and features that buyers might expect to find in their production car of the future.  These cars traveled the country starring in auto shows from coast to coast.

While all the major automakers built dream cars for the auto shows, the best known and probably the most enduring came from GM in the 1950s.  GM took the concept to its highest level by creating the Motorama, an all-General Motors show that traveled across the country in convoy of 125 tractor trailers complete with stage hands, singers, actors, musicians and technicians.

Of course, the real stars of this show were the cars.  Initially designed in large part by Harley Earl, General Motors legendary first styling chief, these vehicles were offered as a glimpse into the corporation’s and America’s automotive future.

Among the most enduring of the Motorama’s Dream Cars are the turbine-powered Firebirds, a series of three highly aerodynamic vehicles inspired by the jet age. 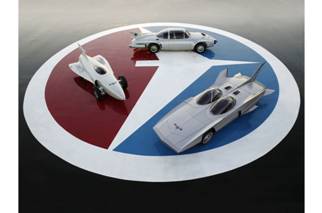 Firebird I made its debut in 1954, 13 years before General Motors reapplied the name to its new Pontiac pony car.

Firebird I was meant as a showcase for turbine power and its aero theme originated in the Douglas F4D Skyray jet airplane, as evidenced by its needle nose, single-seat bubble cockpit, wings and tailfin.

Its body was constructed of fiberglass and wind tunnel tests indicated it was capable of traveling at more than 200 miles per hour.  The turbine engine produced about 400 horsepower and fuel economy was roughly 5 miles per gallon.

Firebird II came out in 1956.  It was slightly larger than its predecessor and it offered seating for four in its center bubble cockpit.  It was billed as “the family sedan of the future.”  While rounder and less defined than Firebird I, the second dream remained extremely aero in design.

The final Firebird dream car of 1959 continued the theme.  Firebird III had seating for two, in separate bubble cockpits.

The instrument panel resembled the dash from an airplane and an all-in-one joystick replaced the traditional steering wheel, brake pedal and accelerator.  Firebird III had seven fins and its overall shape was more missile than jet airplane.

By now, its turbine engine was up to about 20 miles per gallon, but this technology never made it into any of GM’s production vehicles.

The Motoramas ended 1961 with the last version showing no dream cars, focusing instead on enhanced production models.

Over the years, the Motorama cars have traveled in many different directions.  Some went to private collections; a few were found discarded in junkyards and lovingly restored; others have remained with General Motors as part of their Heritage Collection.

This year, about 15 of the cars being assembled for display at the Pebble Beach Concours d’Elegance in recognition of their design influence over the last 50 years.  After Pebble Beach, the three Firebirds will travel to the AACA Museum in Hershey.

“This is truly a landmark event for the Museum,” states Curator, Jeffrey Bliemeister.  “These vehicles were radical designs when new and they have become automotive icons over the last half century.

"They are rarely seen together in a museum setting outside of Michigan.  It is an honor to host them at the AACA Museum.  We appreciate the support the GM Heritage Collection has shown us in providing these legendary dream cars for our exhibition.”

The Antique Auto Museum at Hershey, a member of the Smithsonian Institute Affiliations Program, displays beautifully restored automobiles in unique scenes and settings.

This Museum is one of the nation’s newest and largest automotive museums.  Visitors are transported through eight decades in time from New York to San Francisco, making each visit a visual adventure for all ages.

Special exhibits and events change throughout the year giving return visitors something new.