The loss of a headlight makes nighttime driving hazardous, and may even attract the unwanted attention of the local police. A burned-out taillight, stoplight or turn indicator lamp creates a hazard for other motorists because these lamps signal a vehicle’s directional intentions to other drivers.

Bulbs that provide illumination for instrumentation are also important because they allow the driver to monitor the speedometer and other gauges. Even something as simple as a failed trunk light or dome light can create an inconvenience when operating a vehicle after dark.

So your job as a technician is to help customers “see the light” when they need a replacement lamp or bulb. 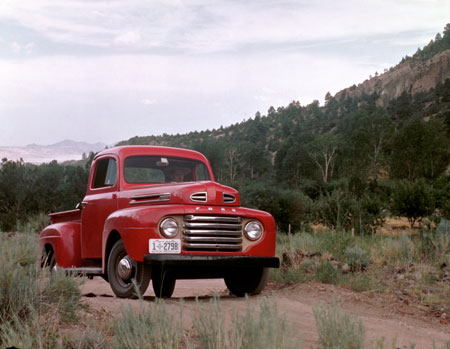 Most of these older style sealed beams (as seen to the right on this 1948 Ford truck) were originally standard incandescent lamps. In 1978, the federal government revised its headlight regulations to allow the use of “halogen” sealed beams. Halogen lamps are brighter and last longer than regular lamps because the bulbs contain a small amount of bromine gas (one of five elements in the halogen chemical family).

The bromine gas allows the use of a smaller, hotter tungsten filament because bromine redeposits the microscopic particles of tungsten that boil off the filament back onto the wire. This extends the life of the bulb and prevents the glass from darkening as the bulb ages.

Did You Know?
In 1983, the Feds approved the use of “composite” headlight assemblies with plastic covers and replaceable bulbs. This gave the vehicle manufacturers more design freedom, reduced the lighting system’s vulnerability to stone damage and made it easier in many
instances to replace a headlight. But it also spawned the introduction of a growing number of new halogen bulb configurations.

Today’s headlamps feature the following:
• Halogen: Halogen lamps are a good upgrade for these older sealed beam applications (shown below) because halogen lamps produce more light with the same or less current. Halogen sealed beams have an “H” prefix on their part numbers and are available in various sizes for round, rectangular and low-profile rectangular headlights.

How much brighter are they? A conventional incandescent bulb generates 16 to 18 lumens of light per watt, compared to 20 to 22 or more lumens per watt for a standard halogen bulb (some high-output halogen bulbs produce as much as 28 to 33 lumens per watt!). 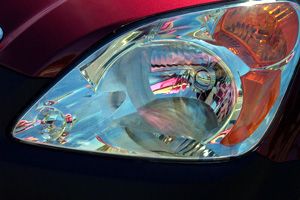 The higher output of a halogen headlight throws more light on the road to improve nighttime visibility and extend the driver’s visual range. The light is also whiter than a regular incandescent bulb, which improves visibility too.

• Xenon: In the late 1990s, two new types of “xenon” headlights were introduced. One type is the “High Intensity Discharge” or HID lighting system that uses a special high-voltage bulb that doesn’t contain a filament. Inside the HID bulb are two electrodes separated by a gap and a mixture of xenon gas, mercury and halide salts.

A ballast unit steps up the base voltage supplied to the HID lamp to create an electrical arc between the electrodes. This produces a “plasma discharge” inside the bulb that gives off a very bright, bluish-colored light for better night vision and range.

HID lighting systems are much more efficient than standard halogen headlights, producing about 75 lumens per watt. And because an HID bulb has no filament to burn out, they last three to five times longer than a standard halogen bulb. But the required ballast electronics also make HID lighting systems very expensive so they are used primarily on high-end luxury cars and SUVs. HID replacement bulbs include D1S, D1R, D2s and D2R types.

The second type of “xenon” headlight — and a more affordable upgrade alternative — is the blue xenon headlamp that can replace standard halogen bulbs. The blue bulbs have a tungsten filament like a standard halogen bulb, but also contain xenon gas that allows the bulb to burn hotter and brighter (up to 30% more light depending on the application). The special coating also gives the light a bluish cast that appears similar to that of a real HID lighting system.

• LEDs: The trend in lighting functions on automobiles is moving to LEDs — Light-Emitting Diodes — that convert electrical energy directly into light. With their small size and low energy requirement, combined with powerful light emissions, product longevity and amazing reliability, LEDs are the technology of the future for automotive lighting.

LED lamps on cars have been around for more than 20 years — first appearing in the mid-1980s for use in hi-mount stop lamps on the rear of vehicles.

But only recently have LEDs been featured as a technology used for front lamps. Anyone who has attended a new vehicle auto show has probably seen LED headlamp designs on various concept vehicles. But that’s about to change, as LED headlamps are ready to hit the streets.

Since LEDs consume very little power, only about 1/10th as much current as a comparable incandescent light for the same amount of light that’s produced, that allows them to last longer — a real benefit to OEMs. This benefit is increasingly important for hybrid or electric vehicles in order to conserve battery power.

And according to Scott Burgess of the The Detroit News, the OEMs are finding additional “glowing appeal” in car design using LEDs.

“Once a beacon for the plush interiors of Lexus, Mercedes and Cadillac, LEDs have made their way into daily drivers such as the Ford Focus and Chevy Malibu, and certainly will make their way into more,” Burgess said. “Interior and exterior designers love the little light bulbs and are finding new ways to use them. 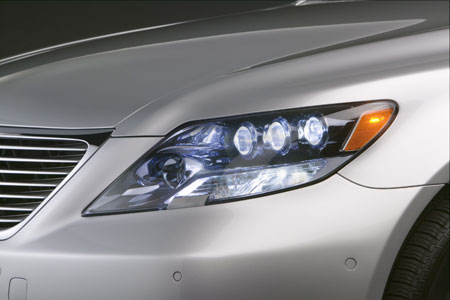 While Lexus claimed to offer the world’s first night-time LED low-beams on its LS 600h L hybrid sedan (shown to the right) , Cadillac said in January that it would begin using the first headlight with LED high- and low-beams on the Escalade Platinum.

John Manoogian, General Motors Corp.’s design director for Cadillac who has been at GM for more than 30 years, said when he started, there were only 6” round, 8” round, small rectangular and large rectangular headlamps. “You designed the front end around that, Manoogian said. “Now, we don’t face those limitations.”

While costs for LEDs have come down, some say there is still a big disadvantage to this headlamp technology — heat issues. Compared with daytime running lamps or rear lamps, a dipped beam or main headlamp is much brighter and generates far more heat.

To address this issue, lamp suppliers have been devising complex systems to remove the heat, such as fans, using cooled cabin air and other ventilation designs. So for now, as with most automotive technology, expect to see LED headlamps primarily only on luxury vehicles.

Lights Out
Nothing lasts forever, and headlights and other bulbs are no exception. After 1,000 or more hours of operation, the light-emitting tungsten filament eventually burns out, causing the lamp to fail. Vibration is another factor that can shorten the life of any bulb and headlights are always vulnerable to stones and debris kicked up by other vehicles, not to mention collision damage.

Lamp Replacement
With all types of lighting applications, finding the right replacement bulb is essential. Small bulbs, in particular, can be difficult to match. Always refer to a lighting catalog or database for the vehicle application.

Comparing bulbs and referring to the number on the old bulb is also a good idea, but keep in mind that the old bulb may not be the correct one for the application if it has been replaced before (maybe that’s why it burned out!). Two bulbs that appear to be the same may have different wattage and resistance ratings. Using the wrong bulb may cause premature bulb failure, circuit overloads or other problems.

On some newer vehicles, “light out” modules are used to sense failed bulbs and alert the driver when a lamp fails. If a replacement bulb does not have the same resistance and wattage rating as the original, it can sometimes cause the module to illuminate the “light out” warning lamp even though the bulb is working.

With halogen and xenon headlights, the lamp receptacle in the headlight housing and wiring connectors are configured differently to eliminate the risk of installing the wrong replacement bulb. Techs should be warned, though, not to touch the bulb itself because fingerprints can cause a high-temperature bulb to fail prematurely.