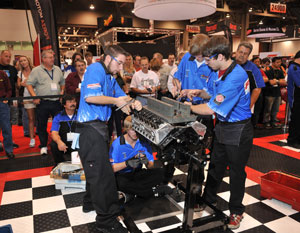 The five members of Team Fel-Pro from Jolliet Central High School in Joliet, IL, each earned $10,000 scholarships for their victory in the inaugural Hot Rodders of Tomorrow Engine Challenge National Championship at the 2009 SEMA Show.

Dubbed the “Showdown at SEMA,” Team Fel-Pro needed just 44:22 minutes to take apart and reassemble a high-performance Chevy 350 engine in the championship round, besting Team MSD’s 56:54.

Hailing from the Elkhart Area Career Center (Elkhart, IN), each member of Team MSD was awarded individual $7,500 scholarships.

The Ohio Technical College and the University of Northwestern Ohio each donated $125,000 toward scholarships to the high school students who participated in the Hot Rodders of Tomorrow Engine Challenge National Championship.

A total $250,000 in scholarships were awarded to the Hot Rodders of Tomorrow Engine Challenge finalists.

For more information on the Hot Rodders of Tomorrow Engine Challenge, visit www.hotroddersoftomorrow.com.